CONGRATULATIONS ON YOUR 40 YEARS! 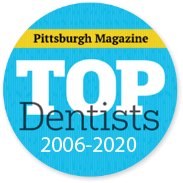 “In 1974, when I started dental school, dental implants were generally not being done,” says Dr. Silberg. “I heard stories and rumors that a New York dentist, Leonard Linkow, was experimenting with dental implants, but he was said to be a ‘mad man.’ Many also believed that a dental implant could never really replace a tooth and, therefore, Linkow was harshly criticized and nearly run out of the profession, just like Galileo or any of the other great minds of science who dared to challenge the status quo.” 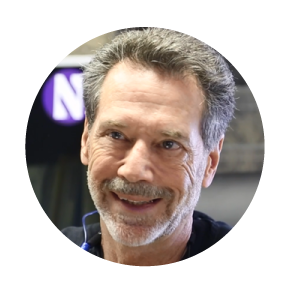 We wish to congratulate Dr. Silberg on his 40 years of practice. His contributions to the field of implant dentistry have been significant, his teachings and influence over other dentists’ practice and philosophies has been valued and appreciated, and most importantly, the way he has improved the quality of life for the patients he has worked with over so many wonderful years. We wish him a happy retirement!

Top Periodontist In Pittsburgh
For 15 Years

Upon graduation from the University of Pittsburgh Dental School in 1978, I turned down an oral surgery program and instead accepted an advanced specialty training program in Periodontics at the University of Pennsylvania. I wanted to be able to save teeth instead of removing them.

In late 1984, I found out that Dr. Linkow had perfected dental implant treatment and was training other dentists to place dental implants. I made sure that I was able to get my very first training directly with Dr. Linkow in early 1985. Thus, my dental implant career began. Since then, my primary interest has been to determine how to make the use of dental implants more predictable and available to more patients. My focus today in dental implant dentistry has evolved into fine-tuning the placement process to maximize the aesthetics of the final restoration, and the longevity of them, while minimizing any inconvenience or discomfort to my patients by making the process safer and more efficient.

From the beginning of my life as a Periodontist, I have worked to promote the importance of the highest quality treatment, along with the highest possible regard for the patient’s health, safety, and comfort within my own practice, as well as within the community of dental and medical professionals. These values have become the guiding principles of my approach, and my staff’s approach, to medicine embodied in our Patient CARE Continuum.”

Dr. Silberg is deeply honored to have been selected by his peers for the Top Periodontist in Pittsburgh award for the past 15 years. Dr. Mark E. Silberg is proud to have been named as one of the region’s top dentists from 2007-2019. Top Dentists, Inc. utilizes a national database to compile information on dentists nationwide. Pittsburgh Magazine collected the names of dentists that were chosen through an exhaustive survey in which thousands of dental professionals from across the nation confidentially evaluated their dental peers. Dr. Silberg has once again been honored by being chosen amongst the regions’ top specialists.

Dr. Mark Silberg, a member of the Global Dentist Panel

has been interviewed by Apex magazine 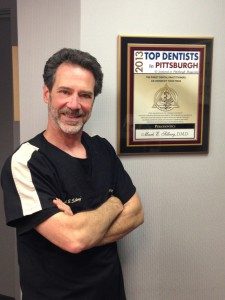 “When I’m not practicing, I share my experience and insight with fellow dentists. I have always loved to teach and share knowledge, which is why I formed the Discovery Study Club in 1994. The Discovery Study Club is part of an international network of study clubs for dentists and other dental specialists. As the founder and director of the Discovery Study Club, my mission is to promote continuing education and training for member dentists, and their teams, to give us a forum to work together, share knowledge, study, learn new technology, and gain information for better ways of planning treatments for our patients. The most rewarding aspect of directing a club like this is that I get to work and study with fellow doctors who all share common values of commitment, excellence, and integrity.”

I have also lectured extensively on dental implants and periodontics at a variety of universities, dental associations and societies, such as the University of Pittsburgh School of Dental Medicine, Allegheny General Hospital Dental Department, Children’s Hospital Pediatric Residents, The Three Rivers Dental Meeting, and even the Pittsburgh Zoo, where I served as a special adviser.”

The early years were difficult with the 1980s economy in recession. The Pittsburgh area suffered greatly as many of our steel mills closed. Through Dr. Silberg’s tireless efforts and his commitment to excellence, the practice continued to grow.

By the mid-1980s it was apparent that the office space was too small and there was no room for expansion. The Tower View office building was being built across the street and the decision was made to move to a larger office suite to better serve our patients.

Dr. Silberg designed a new space, and in September of 1987, he moved across the street to the Tower View building at 6200 Steubenville Pike. The building is named Tower View because of the adjacent township water tower, which is in plain view.

Between 1984 and 1985 the dental implant field went through a radical redesign. Dr. Silberg began to study the new dental implant technology and believed that it was safe and effective treatment. He then began to obtain the necessary training that was needed to be able to place implants for his patients. He placed his first implants in 1984. A gentleman named Romano received them, and the implants are still in place and functioning to this day! In the years since, Dr. Silberg has seen the incredible benefits that these implants provide, and has now restricted his practice to implant dentistry and periodontics.

VALUOCITY: A FABLE FOR DENTISTS

Dr. Marc Cooper and Dr. Mark Silberg’s book, Valuocity, is the first practice management book written as a fable. In the style of highly successful business books by Blanchard, Johnson and Lencioni, Valuocity tells the story of Dr. Carl Oldquist, a seasoned, previously successful owner of a practice in Wisconsin who is confronting the pressing problems and issues of running a practice in today’s tumultuous economic times.

The recession has directly impacted Carl’s practice. His revenues are down 20 percent, new patients are decreasing, receivables are growing like a weed, his staff is unresponsive to the situation and his personal life is beginning to unravel. Carl feels helpless to turn his situation around.

It is only in the chance meeting with Dr. Sidney Kaprov on the San Antonio River Walk during the annual ADA Convention that Carl is introduced to concepts that will ultimately lead him to understand that the practice he has worked so hard to build is no longer equipped to work in the new economy.

Carl visits Sidney at his ranch in northern New Mexico, and during a highly engaging two and a half days of one-on-one interactions, Carl learns the distinctions that will allow him to reformulate his practice, enabling him to be highly successful and satisfied now and well into the future. 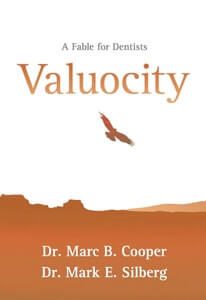